RSS
← How do I add a dot or line above a number in Word to indicate a repeating decimal?
What I do when I’m not being Liz from Libro →

Medalling, podiuming and singular they 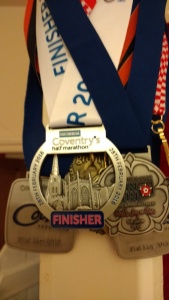 Of course this isn’t exactly what “medalling” means

Languages change. If languages didn’t change, we’d be speaking like Chaucer, British and American English would be identical, or we’d still be using words like “chairman”, “crippled”, “omnibus” and all sorts. We also wouldn’t have a way to describe “selfies”, “Brexit” or “omnishambles”.

The verbs formed from nouns, “medalling” and “podiuming” have been heard again recently, as they are every four years in an event whose name is controlled so closely you’re not supposed to go around mentioning it in blog posts. Lots of people have been complaining about these, saying it’s an erosion of the English language, etc., etc.

Now, I’m one for making sure we retain two words with a close but not identical meaning in order to be able to distinguish between different concepts or things. But in this case, it’s not taking away the distinction between two different things, it’s just adding another word to say the same thing. And we form words in all sorts of ways – by blending, shortening, lengthening them and shifting the part of speech they belong to. Once, we weren’t even allowed to start sentences with and or but …

The other wordy thing I wanted to mention briefly was singular they. This is something editors and other wordy people are still arguing – quite bitterly – about. “They” used to be used just as a plural. But, just as we’ve removed words like chairman and dustman from the language to cover the fact that different genders of people do different jobs, over recent years there’s been an acceptance that binary genders – the idea that everyone is either “he” or “she”, has joined up with a common dislike of the clumsiness of using “he” and “she” in alternate chapters or “he/she”, “s/he”, etc. to promote the use of singular “they”, i.e. the use of “they” to refer to one person in the singular. An example would be, “When someone gets to the front of the queue, they should go to the first available window”.

Now, some people rail against this change, but I think that it can be made to work grammatically, it gets rid of clumsiness and it doesn’t exclude people to whom, for whatever reason, it’s not appropriate to refer using binary gender wording. This is standard in my editing, although I’d never make this kind of change without consultation if it appeared more than very sporadically.

I’m not expecting to change anyone’s mind here; I’m just setting out my stall. These are my personal opinions, but these are interesting topics to think about and they’ve been at the front of my mind recently. Thank you for reading!

I generally talk about word stuff in my Troublesome Pairs posts which do distinguish meanings between pairs or triplets of words. Have a look at the index here!

Posted by Liz Dexter on August 17, 2016 in Be careful, Errors, Ethics, Writing

← How do I add a dot or line above a number in Word to indicate a repeating decimal?
What I do when I’m not being Liz from Libro →

19 responses to “Medalling, podiuming and singular they”

I love hearing from my readers - do please leave a comment! Cancel reply

This site uses Akismet to reduce spam. Learn how your comment data is processed.